Back in November of 2012 I gave out a warning that I didn't think that Windows Phone would survive.  I'm still not certain it will but I am more optimistic today than ever before.  I've been carrying a Lumia 920 as my daily driver for most of the last two months and really have no strong desire to go back to my Galaxy S3.  So I decided I should write a lengthy article on what is keeping me on the Lumia as it might be helpful to others.  First let me say that you really can't go wrong with any of the current flagship devices, the IPhone 5, Galaxy S3/S4, or Lumia 920/1020 so this post is not at all about decided which one is better. I would say that each one of them is better for different types of people.  I'm only writing about what I like about the Lumia 920. 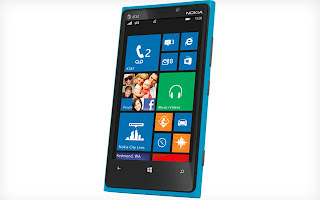 
The Lumia devices are extremely well built.  They don't have removable back plates and, like the IPhone, feel solid through and through.  The color is baked into the phone so dropping it and even taking a gouge out of the body will not leave you with a scratch that is discolored.

The height and width of the 920 are fine but the device really is thicker and heavier than is necessary.  This is due in large part to the built-in wireless charging.  While I prefer the thinness and weight of my Galaxy S3, I don't find it a deal breaker on the Lumia. It spends most of it's time in my pocket and I don't spend hours at a time holding the device to my ear.

Two things that I really like about the phone dialer is the tight integration of visual voice mail and the ability to see phone numbers I have looked up by business name rather than number.  First, visual voice mail is simply a swipe away.  Just tap the phone icon and swipe over the voice mail section.  Some Android phones may have something similar but I didn't really see it on my Galaxy S3 (which still does visual voice mail but it's a separate app from the carrier).

The second thing I really like is how Windows Phone saves the name of a location I looked up to call in the call log.  On most phones when you use maps to look up a business to call, the entry that appears in the call log is just the number.  Later you will look at that number and not remember who you called.  With Windows Phone you will see the actual business name in the cal log making it very clear.  One other small thing I like about the call log is how I can call back the number which just a simple touch of the phone icon next to the entry. I know with the Galaxy S3/S4 you can swipe one direction to call and the other to text but there is something I prefer about a simple touch over a swipe motion.

One thing that Windows Phone is missing is a T-9 dialer.  It can be nice to just pull up a dial pad and start dialing the name of the person you want to call.  You can do this with Android but it's missing on WP8.


While Google Maps is an excellent product, there are two features about Nokia Maps on Windows Phone devices that I really want to highlight. 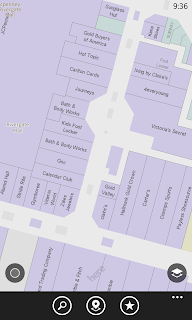 The first is offline maps.  In this connected world it's easy to think that offline maps are not important.  However just a few weeks ago my wife was taking my daughter on a college visit.  She was driving on local surface streets and discovered she had not cell coverage in that area.  Her "blue ball" had kept moving but her maps would not update.  She was lost.  She had to stop and ask directions.  Yes I am aware that Google maps has (had?) some type of offline map caching but it's not like Nokia maps where you can pre-download entire states and countries of mapping data that is always available to you even when you are offline. This even includes local business names.  It's really impressive to show your friends that you can turn off all WiFi and cell service to your phone and *still* look up the directions to a local restaurant and navigate without any issue.

The second one is really small but shows the completeness of the maps.  I've heard Google make noise about "inside maps" so I did the following quick test.  On both my phones I zoomed in on my local mall, Rivergate.  On my Galaxy S3 I could see the outline of the entire mall and the names of the 3-4 major retailers on the corners of the mall.  On the Lumia I could see all that *plus* every single shop on the inside of the mall too.  The complete directory with every shop correctly sized and placed.  Very cool to also show your friends that you have the mall directory in your pocket.  You start getting questions like "what kind of phone is that again?"


Music is one area where I think Windows Phone 8 really shines right now.  There are plenty of apps for playing your music.  The Pandora app (now that it is finally here) is probably the best implementation of Pandora I have ever seen.  I also have Spotify and  iHeartRadio installed.  I am using an app called CloudMuzik to access my Google music cloud.  And while I'm not a subscriber, Xbox Music is baked in and is an excellent alternative to Spotify.  I have also heard that Amazon is bringing an Amazon Music Cloud player to WP8 very soon.  The point is that unless you depend on Amazon Cloud player for your music you will really not have any trouble rocking your tunes.  That being said, I want to call out two things that really make it shine for me.

The first is an app, Nokia Music.  I have been a Pandora user for a long time and I really love the service.  However I find myself using Nokia music more and more.  The main reason is there are no commercials!  And speaking of commercials it is important to point out Pandora is ad-free on WP8 until 2014.  While Nokia doesn't allow you fine-tune by removing songs you don't like, they do provide lots of pre-built mixes and allows you to create your own from a set of artists.  You can also take these mixes offline *all for free*.  This offline capability is really nice as I recently found out on my trip to Tech Ed.  I was about to board one of my flights and wanted to keep listening.  So I just tapped the mix I was listening to and told it to take it offline. Within just a few minutes I had 3 mixes offline that gave me between 1-2 hours of non-repetitive listening while on the plan.  Very nice!  Yes, I know that Spotify can do this too but Nokia Music does it for free!!

The other thing to call out about Nokia Music is their Music+ offering.  For $3.99 per month you can skip as many tracks as you like in your mixes and you can get lyrics to all the songs.  While this is not as good as the on demand ability you get with Spotify, it is also less then half the price.  Nokia Music, Pandora, and Spotify make my Lumia a musical powerhouse.

The second thing I want to mention about music is the controls.  No matter what app is playing background music you can get access to controls to play, pause, and (if supported) next and previous tracks just by pressing either of the volume controls and the controls slide down from the top.  Yes, I realize that on Android the controls are generally available on the lock screen and in the pull down shade.  However, anyone who has used Android has discovered that lock screen music controls are not a given.  Pandora didn't have lock screen controls for some time on my GS3.  In any case, I think the music situation on WP8 is very nice and easily able to satisfy all comers.

That's it for part 1.  In the next installment we'll look at a few more features that make Windows Phone an excellent choice for your next phone!
Posted by Reggie Burnett at 8:19 AM