In part 1 and part 2 of this article I have covered several aspects of Windows Phone that I think make it really shine.  I'm sure I could also write a similar article about IOS and Android but I'm digging Windows Phone these days so I'll leave that work for someone else.  In this last installment I'll cover a few remaining elements that I really like.


Probably the most important thing to me when talking about a mobile phone is battery life.  It hasn't been long ago that we carried "feature" phones, flip phones, candy bar phones, etc and they lasted days and days on a charge.  You really couldn't do much with them besides make a call so the long battery life was understandable.  These days with processors getting more powerful, screens getting larger,and apps and games getting more demanding it's harder then ever to get that battery to last. 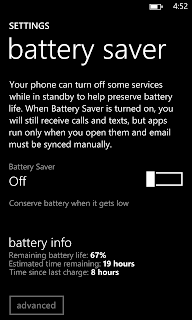 There are many factors that contribute to battery life such as how long the screen is on, how many apps are running in the background, how strong your cell signal is, etc.  Many of these you really can't control such as cell signal and screen on time.  I mean we need the screen on when we are using the phone right?   All platforms take really different approaches to limiting how apps run in the background although Windows Phone and IOS are the most similar.  Essentially when you hit the home button on your Windows Phone then the app is immediately "frozen" in it's current state.  Apps can register to have an action run on a periodic basis in the background but there are tight constraints on how often it can run, how long it can run, and how many of these "agents" can be installed at one time.  The entire point of this is to preserve battery life and user experience.  Those of us that have had laggy Android experiences can appreciate it.

So the battery life on Windows Phone is always good, right?  Well, not always.  Like any other platform you can have apps that do bad things and eat battery.  However I will say that battery life on IOS and Windows Phone is generally acceptable and I find myself not really worrying about the battery life on those devices.  By example I had a very hard time getting my Galaxy S3 to drain at less than 4% per hour even when doing nothing whereas I often see my Lumia draining at 2% per hour during times of very light use.  There is also the peace of mind knowing that games and apps are not running in the background when you don't want them to.  So often I hear others talk about forgetting to kill an app on Android and it eat all their battery.

So while it's not amazingly better I do think that battery life (at least on the Lumia 920) is generally very good.


Voice commands are things that I really like.  I like to text by voice and look up directions by voice.   Windows Phone has a voice system built-in that is very cool but very under utilized.  The key part is that apps installed in the system can register a grammar set that is used to activate the app.   This grammar recognition is done on the phone.  By letting apps register their own grammars it gives the system unlimited expansion.  Let me give you an example: 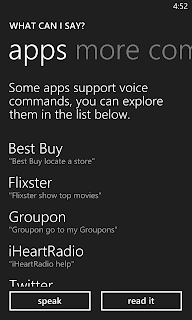 The ABC app has keywords to take you to certain sections of their news app.  Twitter app has phrases to start a new tweet.

Where this is being under utilized is that apps are not continuing the interaction by voice. This is actually a fault with many voice assistant apps on all platforms.  Many will let you dictate by voice and then ask you if what is on screen is correct.  Man, if I was free to look at the screen I likely wouldn't be using my voice to start with.  Once an app has been triggered via voice it needs to complete the interaction verbally.

The Twitter app should be activated with "Twitter, send new tweet".  It should then show the new tweet screen but then respond with "ok, say what you want to tweet".  It then listens and converts to text what you say (yes we know this is always accurate) and then reads it back to you. If ok, asks if you want to tweet it.  You know the rest.

This is a small issue as developers are free to add this capability on their own.  The key part is already there and that is the central voice system that allows apps to extend it very easily.  The *only* platform that has that is Windows Phone.

Posted by Reggie Burnett at 2:56 PM